Another day, another stunning image captured by NASA! The National Aeronautics and Space Administration recently shared a breathtaking image of a sparkling galaxy that’s 59 million light-years away from us!

The image has been shared by NASA Hubble Instagram page where it has shared some “cosmic sparkle” to brighten up your day and Instagram feed. “The galaxy pictured in this Hubble image is estimated to be 59 million light-years away! Called I Zwicky 18, it’s classified as a dwarf irregular galaxy and is much smaller than our Milky Way Galaxy”. 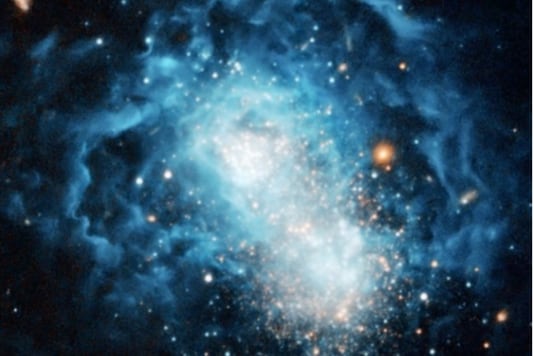 It further states that “the concentrated bluish-white knots at the heart of the galaxy are two major starburst regions where stars are forming at a furious rate,” states the caption of the image shared. The image is the winner of the NASA’s “Choose your Hubble adventure” competition for which users had voted on NASA Hubble stories based on galaxy type, distance, and image release date.

In case you’re unaware, Hubble, the observatory, is the first major optical telescope to be placed in space, the ultimate mountaintop, according to NASA. Hubble has an unobstructed view of the universe and scientists have used it to observe the most distant stars and galaxies as well as the planets in our solar system.

The NASA Hubble Instagram page is filled with beautiful images of our universe and the page has recently also shared a video of a time lapse that shows a series of NASA Chandra X-ray and Hubble observations of Supernova 1987A. Check it out for yourself: